Some things are difficult to explain, aren’t they?

I’d reached retirement, after having worked all my life in a variety of careers, from Baker to the MD of a Specialist Insurance Company, and been fortunate enough to have got about a bit! Firstly, backpacking as a young man, and subsequently via air travel, with an acceptable amount of turning left at the top of the plane steps. The mid life crisis had

wreaked its middle age havoc, luring me into running several international city marathons, (low point finishing behind the NSPCC Caterpillar in London!) and now onto similar challenges on a bicycle, but so far I’ve resisted the Harley and the ponytail! Also, I’d met and fallen in love with a wonderful lady, who three years ago became my wife and changed my World!

So, I had a lot to be thankful for, no real regrets, and I had no major boxes left unticked. There’s always something though and I do like a project!

I’d been retired about a year at the time of our wedding, and the day itself was just wonderful, and of course my focus was entirely on the day and my new wife, of course it was, but as a surprise for her, I’d booked a newly refurbished ‘splittie’ VW campervan called Dolly, through our caterers Darby and Joan Vintage. I can remember thinking then that being involved with a couple on what is probably and hopefully the happiest day of their lives would be a fabulous way to work and to do it by getting to drive something out of the ordinary was a bonus!

So the seed was sown then, but nothing came of it due to volunteer charity work I was involved in plus the bike challenges which were taking up a bit of time! However, there came a moment a few months ago when I thought, if I don’t do it now I never will, and it became then a matter of deciding which type of vehicle to use. All over the Country there is such a variety of vehicles available for weddings, from the Classic/Vintage, to the positively bizarre, (I give the vehicle turned into a Stormtrooper’s helmet as evidence!) that couples are spoiled for choice, so I wanted something that was different and preferably unique. Another important factor was it had to be practical as a wedding car, for a Bride with possibly a large and almost certainly an expensive dress! 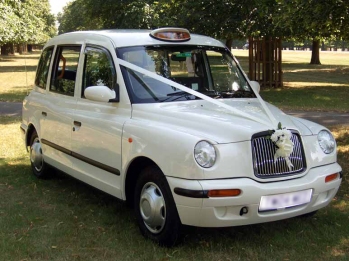 It was then I had the light-bulb moment of having a London Taxi; an iconic ‘Black Cab’; which ticked just about every box, in that it was different, classic in its own way, VERY practical with wide doors and lots of space, and certainly unique as far as here in the East Midlands of the UK is concerned (so far!) Cue feeling rather pleased with myself!

However, it needed to be more than just a cab taken from the streets of London, it needed to be transformed into a car fit for a Bride. And so, Betty, as my cab is now called, is currently undergoing a refurbishment in London, being sprayed Old English White, and fitted with burgundy leather seats, and new carpets. You’ve no idea how frustrating it is waiting for her to be finished, but I am sure the wait will be worth it in the end, and then the serious business of getting her gainfully employed begins!

(The photo of the cab is not Betty, although it’s exactly the same model and this is the template we’re using. If I could credit the owner of the photo and the cab, I would)