A time for reflection at the end of our first year of providing Wedding Car Hire to Brides & Grooms in the East Midlands.

I want to say that it’s gone better than expected, but as we didn’t know what to expect, that wouldn’t make sense. Overall we’re happy with the number of bookings we’ve had, not only for 2017/2018, but also for this year, which really was unexpected!

What is certain is that it’s met our expectations in respect of the joy and pleasure we’ve had from helping couples on their special day, and it’s true to say that we’ve met some really lovely people.

Betty has proved to be very popular and has lived up to her billing as being both different and practical. It’s been a long time since I’ve really enjoyed driving, but getting behind her wheel has brought that pleasure back in no small way. She’s just fun!

She’s been rock solid reliable, which is what she was built to be, and has just needed some tweaking and tinkering along the way to keep her up to scratch.

So no dramas as far as Betty’s concerned but the same can’t be said about things out of our control. There have been a few moments along the way, including:

A Bride who arrived at the Church and realised she’d left her bouquet at home. I was made aware of this by the sight of a Bridesmaid running back to me and asking to be taken back to the house to pick it up. It’s fair to say that that journey was less sedate than the initial one! Fortunately, the distance wasn’t great, so nobody was kept waiting for too long.

On another occasion, a Bridesmaid split her dress getting into the car which was waiting to take them. Fortunately the Mother of the Bride was handy with needle and thread, but it did take a good twenty minutes to fix. Meanwhile the Bride and her Father were sitting in the back of Betty and I have to say I’ve never seen anyone so calm under the circumstances. The odd glass of bubbly being brought out to them probably helped but it was all pretty chilled in the back, which almost certainly wasn’t the case in the house!

I’m a stickler for punctuality and for each wedding I’ve arrived at least ten minutes before the designated leaving time. My normal process is to pop a card through the door, then wait outside with the engine running until everyone’s ready. I’m sure pressing doorbells or honking the horn would only add to whatever stress is already going on inside! So I was a bit taken aback to arrive to pick up one Bride in Ilkeston, only to find her and her Father standing outside the house on the pavement, as if they were waiting for a bus! Naturally, we arrived at the Register Office early, only to find that the preceding wedding hadn’t even started, and their wedding party was still outside waiting to go in. We had to park up in a lay-by and wait for 30 minutes!

And then there was my “Inbetweeners” moment…  I’d collected the Bride and her Father, in Ilkeston again, and was leaving for the Register Office and had to feed into a large, busy roundabout. I was waiting for a suitable gap to slot into and spotted one and got into it. It was only after we’d all left the roundabout that I became aware that I’d slotted into a funeral cortege. For those who’ve seen the Inbetweeners episode, this was identical -a Hearse, then a mourners car, then a Bridal car with ribbons and bows, as opposed to the little yellow Fiat, followed by another car full of mourners. The funeral cars were travelling at under the prevailing speed limits, so I thought I can pull out and overtake pretty soon, but oncoming traffic made that impossible. About ten minutes later, they all pulled into the Crematorium, but it was an uncomfortable ten minutes, for me at least!

No doubt in the coming years, there will be more incidents, but more joy and pleasure too, and we can’t wait to be a part of it! 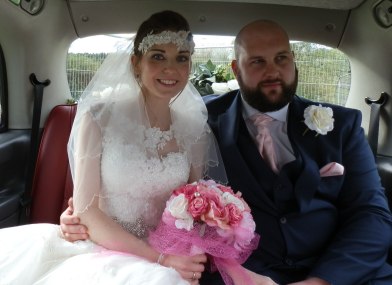 For more information about our services, please visit Our Website here