The main wedding season is now over for the year, and after the current flurry of October weddings, we only have a handful left until the New Year. This will be the end of our second year, having been asked to do our first wedding in June 2016.

Thankfully, we’re even more hooked on enjoying what we’ve chosen to do, and for us, each wedding we’ve been lucky to be involved in has been unique and enjoyable. No two weddings are ever the same, as obviously there are different people each time, in different parts of the region and many different venues. They’ve varied from the relaxed and casual to the more dressy and formal. 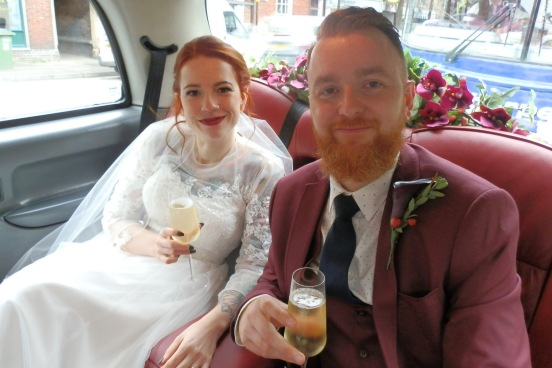 Once again, we’ve been fortunate and have had lovely couples and shared some lovely moments with them. There’s been a good mix of ages, from very young to middle aged, and although they’ve been mostly Brides & Grooms, we’ve had two more same sex weddings, both of them with two Brides. We did have a male same sex couple booked for this year, but unfortunately for them, they had to cancel their wedding.

There’s been quite a range of employment too among our Brides and Grooms, with them being Teachers, Factory Workers, Nurses, Care Workers, Doctors, Builders, Journalists, Scientists, and even a former GB athlete, and those are just the ones we know about!

We’ve covered the East Midlands pretty well this year, with weddings in Derbyshire, Nottinghamshire, Leicestershire, Lincolnshire, and also into Warwickshire and Staffordshire.  Betty’s fame spreads, and we’ve even had enquiries from Gloucestershire and South Wales, but these just aren’t practical for us to do. Some have been right on our doorstep and others a fair distance away. This weekend, one wedding has a record 50 minute drive between the ceremony and reception venues!

The range of venues we’ve been to has been extensive – including Village Halls and Churches, Grand Cathedrals, former Miner’s Welfares, Register Offices, Pubs and Clubs, Castles, Private Houses, Hotels, County Cricket Grounds, and even a Tipi and a Zoo! We’ll never get bored!

Betty has performed well. Being an old lady there’s always work to be done on her and improvements to be made, and she’s now well known at our local garage. These London Taxis are built to last though, and with all the TLC she’s now getting, there’s no reason why she won’t keep going for years. She’s now a film star too, having featured in a Training Video for the Taxi Industry. As the above diverse mix of people and places she’s been involved with shows, she’s pretty egalitarian and can’t be pigeon holed into any particular sector.

The London connection has played its part. We’ve had quite a few weddings where either those involved were originally from London and now live in the area, or are from the area, but now live and work in London, and are coming back to the family to get married. We’ve also worked on a couple of weddings with an old London Bus.

Thankfully, there have been almost no problems (touches wood!) A Bridesmaid’s dress splitting needing last minute repairs is about the only drama so far, and we’ve only had to use our umbrellas once! It’s raining hard as I write though, and we’ve a wedding tomorrow and the next day…

We’ve no regrets at all about starting this venture, and the old saying often attributed to Confucius, “Choose a job you love and you’ll never have to work a day in your life”, is very true!