For our most recent wedding, we traveled out of our normal East Midlands comfort zone and went within sniffing distance of Birmingham! Not that this was a problem for Betty as she spent her first 15 years doing what she does best in London.

The wedding of the lovely Georgia and Danny took place in the Sutton Coldfield area, and with the Bride being collected from Little Aston, and taken to nearby Four Oaks, it was a pleasant mix of rural, and leafy suburbs.

As it was another Spring wedding, the weather had to poke its nose in and with rain forecast for most of the day, I made sure the umbrellas and car cleaning kit were on board.  Betty will always leave home in tip top condition, but after an hour’s traveling in poor weather, she always needs at least a good rub down on arrival. 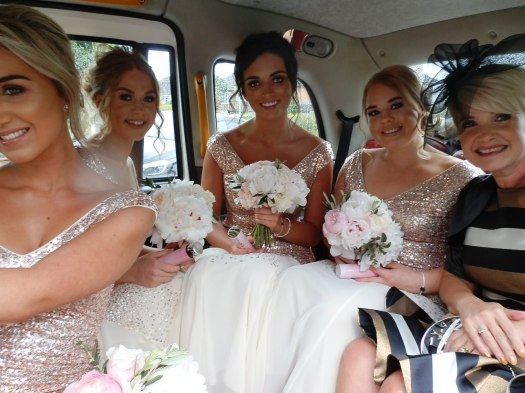 Once again we were to take the Bridesmaids and Mother of the Bride first and then return for the Bride and her Father.

Fortunately, by the time of the first journey, the rain was little more than a drizzle, although the umbrellas were used to make sure the fabulous dresses of the Bridesmaids were protected.

The ceremony was at All Saints Church, Four Oaks, which has an interesting drop off point right on a busy crossroads and with just a small space by the war memorial to pull in to. Opening the driver’s door into traffic was challenging, but the Vicar confirmed I was doing the right thing!

And then it was the turn of Georgia and her Father, and a more relaxed Bride so close to a wedding you’d be hard put to find. As with her Bridesmaids, she looked fabulous and by this time it was dry enough not to need the umbrellas for her short walk to the Church door.

At the rear of the Church is the Church Centre, which operates as a community centre. I drove around to park there until after the ceremony just as a children’s martial arts class was kicking out. The car park, which was already full of wedding guests’ cars, had to deal with a sudden rush of luxury 4 x 4s and sleek limos, as the little darlings were collected and unsurprisingly, gridlock ensued! However, it was all very civilised and no horns were leant on or voices raised! 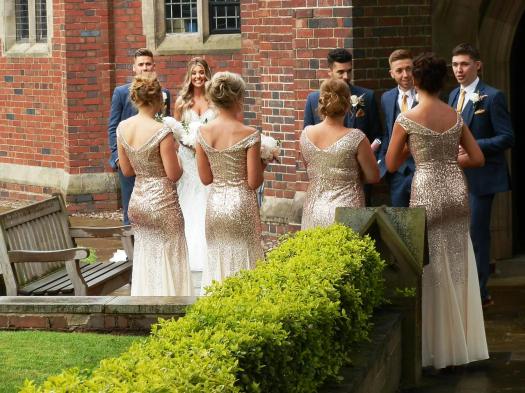 Fortunately, they’d dispersed in time for me to get Betty back in place by the war memorial before the newly married couple came out for their photos, and the rain was so light that nobody was bothered by it. Betty had had another wipe down during the ceremony and was ready for the onward journey. 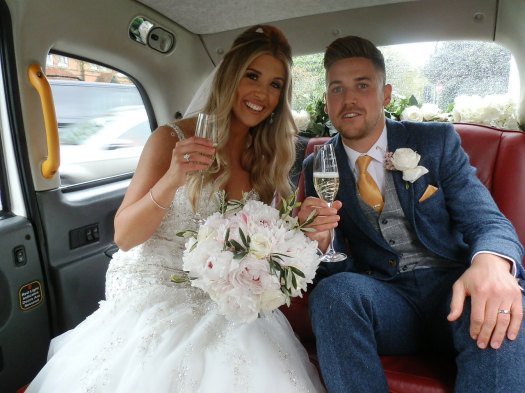 The reception was held at ‘Alrewas Hayes Exclusive Countryside Venue’ and was on the way back home for Betty.

Georgia and new hubby Danny, were very friendly and chatty and had a great time playing their music and having some bubbly from a very glittery bottle. A few guests overtook us on the dual carriageway, as Betty doesn’t do speed, and this time horns were honked and quick photos of the couple taken through the windows!

It was our first wedding at this venue but it looked great with a Country House entrance which leads through to a huge permanent marquee at the rear. No doubt they all had a great time and partied hard! It was a real pleasure for us to play our part in their special day!

For more information about White Taxi Weddings and our services, please check us out HERE.